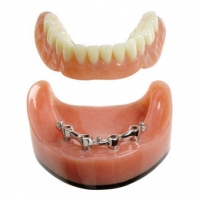 From a functional and esthetics point of view, be aware that there are a whole range of prosthesis designed to provide you with stability, comfort and desired smile.

Developed from balanced or biofunctional prosthesis, the dental plate on implants offers a fit and an incomparable esthetics. More popular than ever, implants retained dental prosthesis is considered the only treatment that provides comparable chewing strength as of natural teeth. Whether the prosthesis on implants is removable or fixed, implant stability aims to slow down the process of bone resorption caused by the loss of teeth and wearing of a traditional prosthesis.

This type of treatment allows the implant to stabilize and retain the prosthesis which remains in part supported by the gum. Removable on 2 or more implants, the prosthesis significantly slows bone resorption and restores masticatory function by ending the discomfort and recurrent injuries.

REMOVABLE PROSTHESIS ON IMPLANTS WITH BAR

Used in cases of very advanced bone resorption, this option remains the best treatment solution for those who wish to keep a removable prosthesis.   For this type of prosthesis, implants are inter-connected with a metal structure (bar) which support the prosthesis and solidifies it. Leaving only a partial support of the prosthesis on the gums, assigning all charges on the dental implants.

The new generation of this prosthesis allows the integration of the bar inside the dental plate itself, leaving only discreet connection elements of the implants in the gums of the patient when the prosthesis is removed.

Just like the removable prosthesis with bar, the fixed prosthesis on implant is specifically designed to meet the very advanced case of bone resorption. Permanently fixed to the gums, the denture is fully supported by the implants that maintain the health of the jaw bone, the same way as natural teeth would do. Precisely tailored, fixed prosthesis on implant provides an incomparable feeling of stability and esthetics than any other alternative prosthetic treatment plan.